»If I perish – do not let my paintings die« 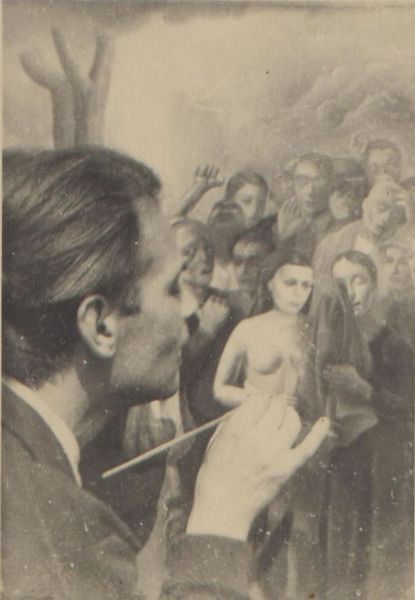 Unlike any other artist of the first half of the century, the painter Felix Nussbaum, born in Osnabrück in 1904 and murdered at Auschwitz in 1944, recorded the experiences of the decades following the First World War in his paintings and reflected upon them as part of his own situation, which the artist, as a Jew, was pushed into by the racist ideology of national-socialist Germany. His pictures are shaped by the contemplative security of the province, the rapid success in the art metropolis of Berlin, consistent with the spirit of the age, the menace and disorientation of emigration, the threat of war and bomb war, the fear in internment camp, isolation in the underground and hideout, and finally the suffering and annihilation of the Jews in Europe by the Nazi regime. No other victim has artistically documented the "Holocaust" of Jews in Europe like Nussbaum. For him, in his hopeless situation, painting became an act of resistance, because it enabled him to retain his human dignity and, for a long time, gave him the strength he needed to survive. He was a recorder of this era, and became its victim.

The artist Felix Nussbaum cannot be assigned to the avant-garde; he belongs to the ''lost generation'', born around 1900, whose artistic development was impeded, like no other generation, by the circumstances of the time, cut off and finally forgotten. Their rediscovery only commenced in the 1970s.
This is also when the Cultural History Museum of Osnabrück started to become preoccupied with the painter Felix Nussbaum. The Cultural History Museum of Osnabrück has carried out research into the life and works of Felix Nussbaum for over twenty years. In the course of time, the largest collection of works by this artist emerged in the museum, comprising more than 200 pictures. They are supplemented by documents containing biographical, contemporary and political elements that enable the experiences behind his pictures to be recognised as a political legacy: as a request and obligation not to forget what happened. This obligation was at last met in 1998 when the Felix Nussbaum Haus, designed by the architect Daniel Libeskind, was opened. The complete works of Felix Nussbaum have been exhibited here since March 1999, in accordance with his wish:''Even if I perish, do not let my pictures die, show them to the public.

In 1995, the Osnabrück contest for the realisation of the Felix Nussbaum Haus was won by the American architect Daniel Libeskind, who held his ground against 300 competitors. This was a stroke of luck, as the overwhelming national and international echo confirms. Libeskind has managed to establish an interrelation between the architecture and the tragic combination of Felix Nussbaum’s life and works.

In 2011 the Felix Nussbaum Haus and the Cultural History Museum Osnabrück opened their doors again after almost a year of reconstruction. The new extension creates a joint entrance area for both buildings and gives the museum a new face.

The extension shifts the Felix Nussbaum Haus architecturally to the more prominent side of the museums towards the Heger-Tor-Wall and with its specific use of forms clearly reveals the hallmarks of Daniel Libeskind to the visitor who approaches the building complex from the historic city. Like the cut off triangle of the Felix Nussbaum Haus this section of the building has been docked on to the side of the Cultural History Museum.

A new museum shop and inviting information areas await the visitor. The two-storey extension houses the museum shop with the ticket office and a museum-lecture room with a library. A multifunctional event area has been installed in the basement of the Cultural History Museum inviting visitors to a wealth of activities relating to the exhibitions.

It is thanks to financial support from the European Regional Development Fund (ERDF), the Stiftung Niedersachsen and the Stiftung Stahlwerk Georgsmarienhütte and the city of Osnabrück that the extension to the Felix Nussbaum Haus has become a reality.

Together with the reopening of both buildings the Felix Nussbaum collection will also be presented in a newly conceived permanent exhibition which interrelates with the exhibition of the Cultural History Museum of the history of the city of Osnabrück. Themed rooms strongly emphasise individual aspects of Felix Nussbaum’s artistic works thus dispensing with the former chronologically designed exhibition tour. The new presentation gives glimpses of previously unknown aspects of his artistic accomplishments. 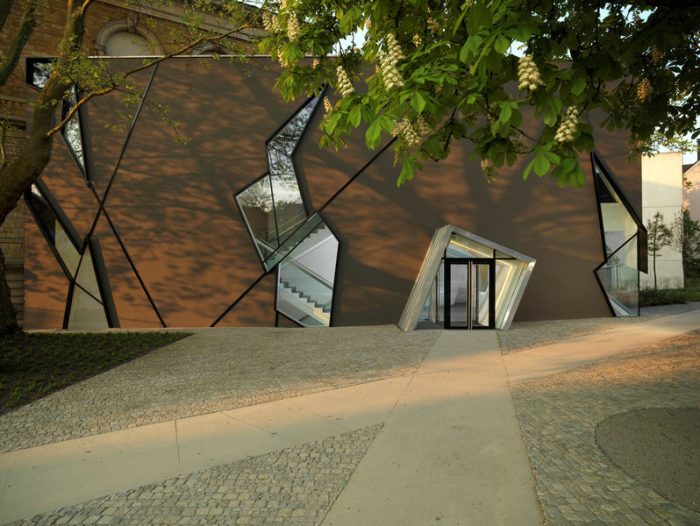 The internationally renowned architect and urban planner Daniel Libeskind has introduced a new critical discourse and a multidisciplinary approach to architecture. His creations range from large cultural establishments, such as museums and concert halls, to landscape and urban planning and the design of stage settings, installations and exhibitions.

Daniel Libeskind was born in 1946 in Lódz, Poland. He obtained American citizenship in 1965. He studied Music in Israel and the USA, followed by Architecture at the Cooper Union for the Advancement of Science and Art in New York until 1970. In 1972, he was awarded a post-graduate degree in History and Theory of Architecture at the School of Comparative Studies in Essex.
In 1989, Daniel Libeskind won the contest to design the Jewish Museum in Berlin, which was opened in 1999. His museum for the City of Osnabrück – the Felix Nussbaum Hause – was inaugurated in July 1998. He is a member of the Bund Deutscher Architekten (BDA).

Libeskind has won numerous awards, including the 1999 German Architect Award for the Jewish Museum in Berlin as well as the Goethe Medal in the same year. In 1996, he also received the American Academy of Arts and Letters Award for Architecture, as well as the Berliner Culture Award. In 1997, he was awarded an honorary doctorate by the Humboldt University in Berlin, followed by an honorary doctorate from the College of Arts and Humanities at Essex University in 1999.

His works have been exhibited in large museums and galleries throughout the world, and have been the subject of numerous international publications in many languages. His ideas have influenced a new generation of architects. Libeskind is considered one of the most important representatives, theoreticians and teachers of deconstructivism. 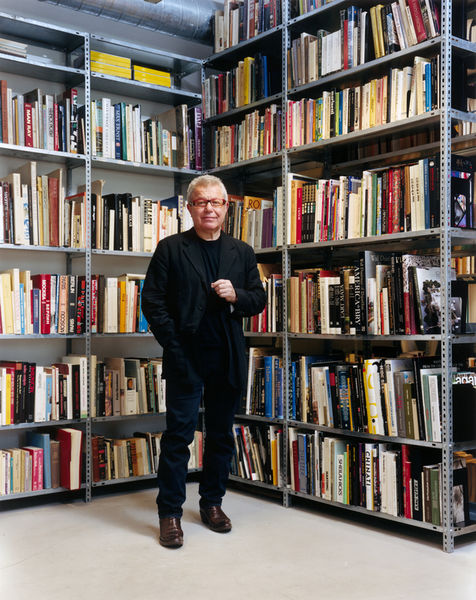 The catalogue raisonné presents the complete paintings, drawings and casual works by the artist Felix Nussbaum from 1919 to 1944. In addition to coloured illustrations of all of the works, the database offers detailed information on the individual works and on the complete collection of the artist.

The extensive overall portrayal of all of the artist’s well-known works offers a new basis for the examination of the artist Felix Nussbaum. The updated overall portrayal is based on the catalogue raisonné by Peter Junk and Wendelin Zimmer (which was published in the monograph 'Felix Nussbaum – Leben und Werk' by Rasch Bramsche and DuMont Cologne in 1982), which was supplemented by more than 150 newly discovered works of the past decades. In addition to detailed information on 477 works, the database also provides an extensive list of exhibitions and a bibliography.

Link: Catalogue raisonné of the works of Felix Nussbaum

New findings concerning the date of death of  Felix Nussbaum

The artist probably died after the 20th of September 1944
11.08.2014. When he arrived at Auschwitz on the second of August 1944, Felix Nussbaum was given the number B-3594. This means that Felix Nussbaum survived not only the selection ramp but also, at least, the 20th September 1944; the reason being that on that day he was admitted to the hospital ward (health post) of the Auschwitz main camp. These are the results of researches conducted by Neue Osnabrücker Zeitung, who published these new findings on the second of August, the supposed press spokesman date of Felix Nussbaum’s death.

Thomas Limberg, editor of Neue Osnabrücker Zeitung, discovered that piece of information in the Auschwitz archives, which had not been available before. A copy of a page of the patients register containing the names of all the patients that had been admitted to the ward is the source which mentions the two facts regarding Felix Nussbaum’s life. With the help of the prisoner number B-3594 it has become possible to determine the period during which Felix Nussbaum was murdered at Auschwitz: i.e. after the twentieth of September 1944 and before the twenty-seventh of January 1945.

Together with Erich Maria Remarque and Hans Calmeyer, Felix Nussbaum belongs to the most prominent and outstanding Osnabrück personalities of the twentieth century. As an artist of the so-called “lost and missing generation” Felix Nussbaum can meanwhile be described as an internationally esteemed artist. These finding regarding Felix Nussbaum’s date of death have given rise to concerns and questions in the city of Osnabrück which has devoted an exhibition building of its own designed by Daniel Libeskind to Felix Nussbaum and his work.

So far it had been assumed that Felix Nussbaum had been murdered immediately after his arrival at Auschwitz on the second of August together with his wife Felka Platek. The documents evaluated by Thomas Limberg which have become accessible for the first time prove that the date assumed cannot be correct. This leads to many questions: How long was Felix Nussbaum able to survive in the concentration camp? How long was it possible for him to be artistically creative in spite of the fact that he was detained in a camp? Is it possible that drawings from his time at the Auschwitz extermination camp still exist? Who was imprisoned with him at the same time? Are there any Auschwitz survivors who are still alive and have known him? What did he know of his wife Felka Platek’s death? When exactly did Felix Nussbaum die?

Ms Inge Jaehner, director of the Felix-Nussbaum-Haus, will conduct an appraisal of the findings now available.

Thomas Limberg (33), editor of Neue Osnabrücker Zeitung (NOZ), did the research at Auschwitz on his own. Out of respect for Felix Nussbaum, Thomas Limberg, a professional historian and political scientist intended to contribute to the solution of unsettled questions. The findings mentioned have been published in Neue Osnabrücker Zeitung, which – after more than nine months of research – familiarized the public with this topic for the first time on the City of Osnabrück second of August.

For further information go to the internet sites of Neue Osnabrücker Zeitung: www.noz.de 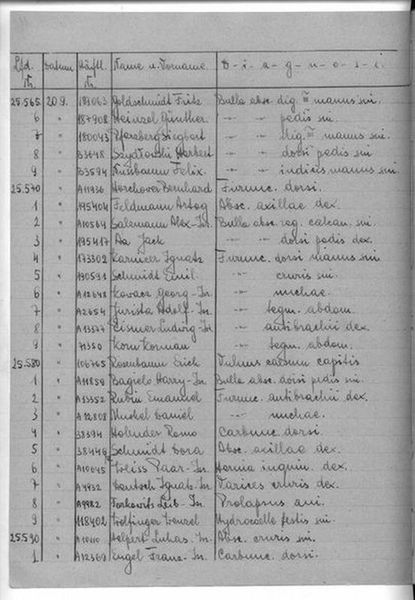 Due to the anniversary celebrations of the Felix-Nussbaum-Haus the artist's works will not be shown from 4.7.-8.8.18. Please excuse the circumstances.

**Locals of Osnabrück, who bring a non-local visitor to the museum get free entrance (Osnabrück is including postcode 49074-49090)

There are some more associations or cooperations which guarantee reduced or free entrance, for more information please ask our team of the shop.

Special service hint:
At the moment we are not able to provide payment service via EC card or Credit card. We hope to provide this service soon.